Barshinger Hall (formerly Hensel Hall) existed on the campus of Franklin & Marshall College as an awkward 600+ seat lecture hall that was used intermittently for musical presentations, simple drama productions, and film presentations. After several architectural and acoustical studies it was decided to renovate the hall into a 500-seat concert hall and at the same time modify the adjacent dormitory into music faculty offices and connect the two buildings.

The existing shell of the hall building was retained and only slightly modified. All interior finishes, walls, floors and architectural ceilings were removed. New construction included a custom stage platform with orchestra and choral riser systems, overhead rigging and acoustic reflectors, a balcony with a new projection room, backstage storage and crossover, an enlarged lobby, and a mechanical equipment room. A fabric ceiling was used to acoustically couple the audience space to the attic truss space above. The risers can be completely removed from the stage.

The mechanical modification includes an under-floor air supply system with overhead return. Air is supplied to the audience through floor-mounted mushrooms over an under-floor plenum system. The new orchestra riser system also integrates air supply to the performers via slots within the leading edge of each riser level. Return air intakes were located near the stage end of the attic, near the heat load of the theatrical lighting equipment.

Variable acoustic banners that store within the attic truss space were designed to adjust the space for the variety of uses anticipated, including choral rehearsals, orchestra and sectional rehearsals, as well as student recitals, film presentations, concerts, and general lectures. Provision was made also for motorized blackout shades and additional acoustic banners for future increased movie use. 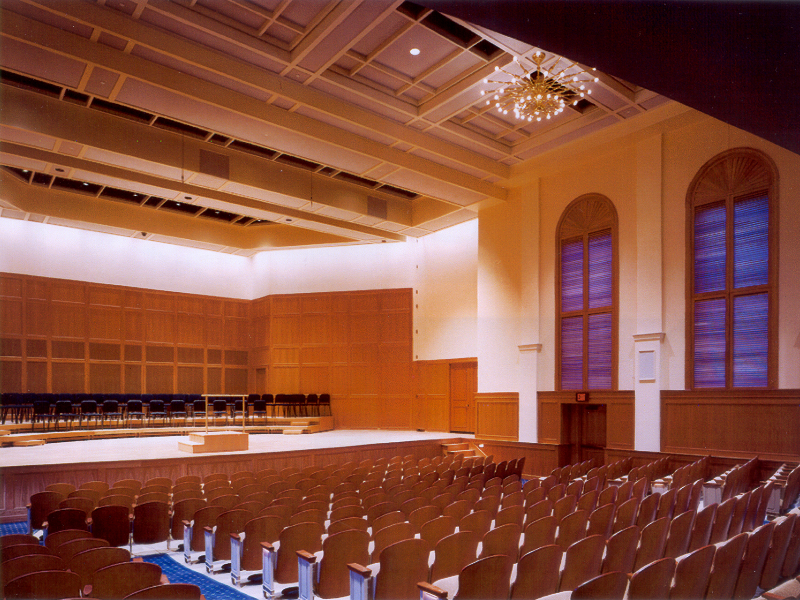